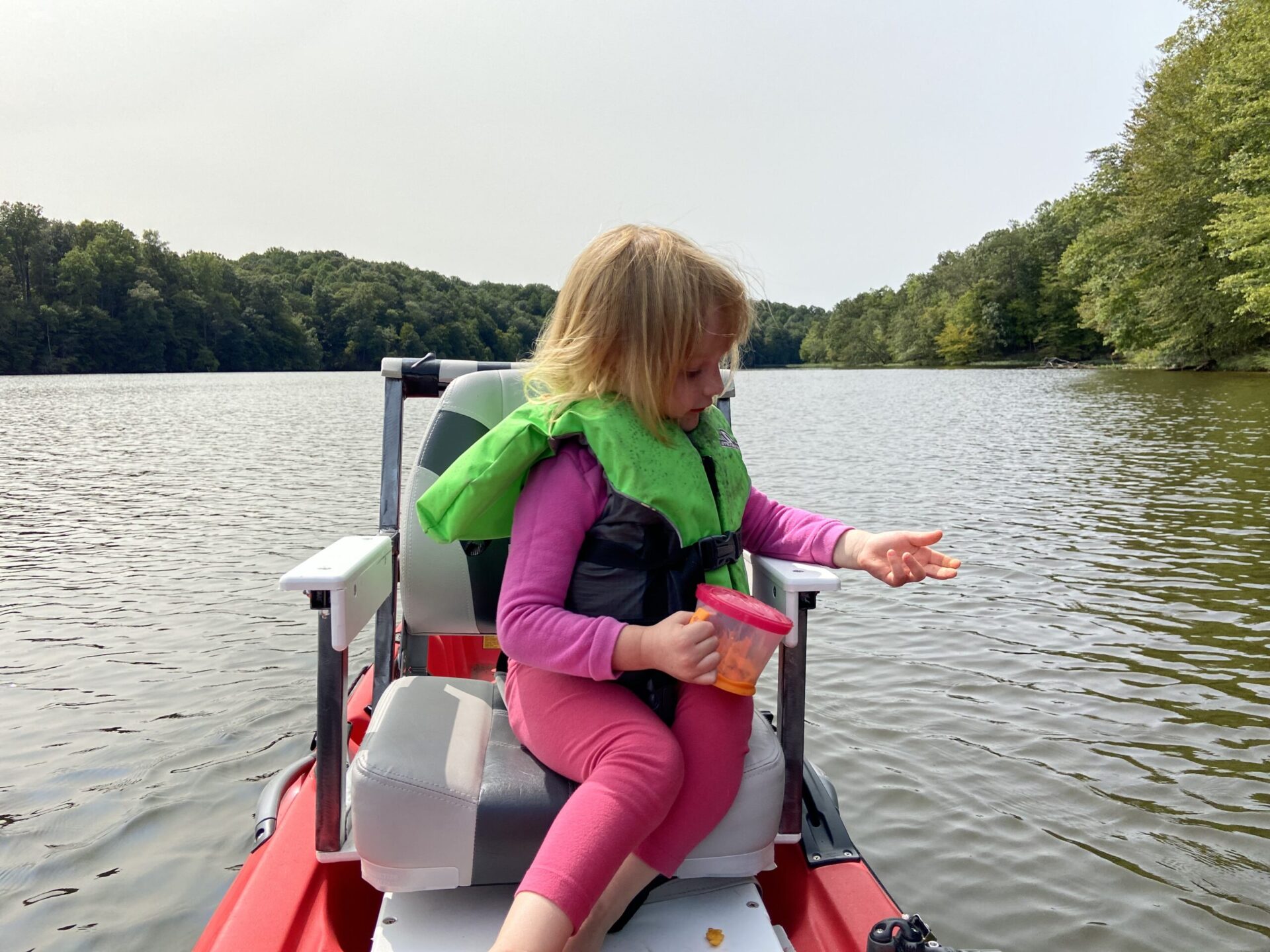 While the weather is still warm, we want to spend as much time on the water as possible. Neither of my boats are particularly toddler-friendly. Our Hobie Tandem Island is close though. It is simple to set up and launch (especially when using the kayak part alone). I can even avoid using a boat ramp by using a plug-in set of wheels that support the back of the boat. (A boat ramp is dangerous when alone with a small child). The only problem with the Tandem Island is that there is nothing to keep my daughter in one place and there is nothing to prevent her from standing up in an unstable position. I decided to make her a comfortable seat that would restrict her movement forward while giving her sturdy hand-holds when sitting or standing. I decided it would be best if she faced me at eye level so that we can communicate and I can better attend to her needs (especially giving her snacks, toys, and drinks).

To build this project, I ordered 20 feet of stainless steel, and used the rest of the plastic marine board from my earlier potty project. I also used a folding boat seat and a swivel mount.

The first step (not shown) was to cut the marine board into a part that attaches to the boat and a separate section that holds the seat base. A rotating mount allows the sections (and the seat) to swivel to face forward or backwards. A clevis pin holds the assembly in place in either orientation. Plastic edges were rounded with a handheld router.

This was my first time welding stainless steel. The process was super simple. The only thing I needed to do was swap the wire in my flux-core welder to Blue Demon stainless wire. For this project, I also used a grinder with cutting/grinding/sanding/polishing disks, a drill, and a tool for marking angles. For a table, I used my front steps. This setup was super uncomfortable, but it got the job done. All of the things I needed (including safety gear) cost less than one of my better woodworking tools, like a good track saw.


I made the top plastic section extra wide so that I could later trim to the exact dimensions of the finished stainless steel frame. Since I was forming the frame without precise tools, I simply traced the frame on the plastic, then cut the plastic to exact dimensions.

The seat folds to be more streamlined. To my surprise, my daughter loves to sit facing forward on the folded seat. She is super secure in this position since her legs go under the horizontal rail. At this point in the project, I just needed to pad the top rail and base (where the frame touches the boat), create straps to join the seat to the boat, and create better arm rests from my marine board scraps.

Some action shots of the completed seat. The seat works as intended in kayak mode. We’ve gone out on 5 hour trips (with breaks ashore). I’d recommended bringing some floating toys/a paddle to keep a toddler occupied on a longer trip. I raised the center of gravity significantly, so don’t think I’d put a large adult passenger in the seat when using the boat as a kayak. The seat wasn’t great for sailing, as she prefers to lie in the tramps. In sailing mode, the seat would be better placed in the back position for an adult user. I think sailing with a toddler without a second set of adult hands is too complicated, so I’m not sure we will reattempt. In kayak mode, I can safely stage the boat and launch in minutes. Using my plug-in dolly, the trailer is never in the water. This is key to boating with a small child.

This short video demonstrates how well we can communicate in the rear-facing position.

I designed the padded top rail so she would have a good handhold when standing. It works perfectly even when she has one free hand.

I can even operate the boat and steer sitting backwards from the seat. Here, she had a tantrum and insisted that she sit in the “daddy seat”.

The Hobie plug-in dolly behind her can get in the way when sailing, but is awesome in kayak mode to safely get in and out of the water without backing the trailer down the ramp.

As a side project, I decided to better secure my boat. Out of regular steel, I fashioned this assembly to U-lock the boat to the trailer frame. I padded everything later to prevent scratches.